We do not warranty for it if you do not use enough cooling systerm for it.

LED Stadium Lights are designed to replace 400W to 2000W Metal Halide and HPS stadium lights. We have DLC Qualified LED stadium lights which makes them eligible for rebates through your utility company.

Stadium lights have so many applications over and above lighting up outdoor sports areas. They can be used for security lighting, flood lighting and on top of large poles. We can support high voltage applications up to 480V.

One of the latest trends that people attending stadiums and sports arenas are noticing are the new energy-efficient lighting systems that make the game look spectacular. But the switch from inefficient metal halide lamps to LED technology did not begin yesterday, it began way back in 2012 when a young LED company installed the first LED lighting system in New York’s Onondaga County War Memorial Hockey Arena. Less than four years later, LED lights were used to illuminate Super Bowl XLIX at the University of Phoenix Stadium located in Glendale, Arizona.

The initial attraction to LED technology for stadium managers and owners was the estimated 75% savings on energy costs. However, the universal acceptance of the technology – which is used by almost a third of professional sports venues – became possible when team executives clearly saw that it had the ability to enhance the game experience for fans.

The Hard Rock Stadium spent more than $550 million on its LED conversion project. LED lights completely transformed the stadium and took the fan experience to a whole new level. According to Todd Brian, the senior vice president of stadium operations, LED technology is a cost-effective solution that has enhanced the event presentation for soccer, football, concerts, and the other world-class events that are held at the facility.

And while more and more stadiums are making the switch to LED technology, it has also become standard for all new stadiums to be constructed with LED lighting systems. The two newest stadiums that have been built by the NFL, the U.S. Bank Stadium in Minneapolis and the Mercedes-Benz Stadium in Atlanta, both feature LED lighting systems. They are also the host sites for super bowl LII and LIII. Fiserv Forum in Milwaukee, a multipurpose arena that is the new home of NBA’s Milwaukee Bucks, has also been built with LED technology.

The controllability of LED lights greatly benefits these stadiums as it allows for entertaining light shows such as player introductions, half-time shows, and scoring celebrations. Back in 2015, Katy Perry extended her half-time show at Super BOWL XLIX beyond what was initially planned thanks to LED technology. This happened because the producers learned that LEDs could allow them to black out the arena and restore the light levels immediately.

Stadium lights are a very crucial part of any stadium and other outdoor sports venues. These spaces host a variety of events which include sports, flea markets, concerts, and outdoor games. Having bright stadium lights is an absolute necessity as they not only provide sufficient lighting for atheletes and other people on the field, they also allow spectators and visitors to move in and out of the venue easily and safely.

When LED stadium lights are installed in a stadium that lacks a good source of illumination, they allow for more events to take place in the space. They increase the versatility and usefulness of an outdoor sports venue and provide a lot of value to the operators and owners of the venue.

Almost every American remembers the temporary power outage that made Super Bowl Sunday a blackout Sunday. The Baltimore Ravens were playing against the San Francisco 49ers in New Orleans when the Superdome experienced a blackout that lasted for 34 minutes. If the field had been illuminated by LEDs, the situation would have been very different.

The main problem was the type of light fixtures used. It is reported that after the blackout, power was restored almost immediately. However, the Superdome, like some other sports venues, uses metal halide lamps for illumination. Since these light sources take up to 30 minutes to warm up, the game could not resume until the light fixtures had attained full brightness.

A metal halide lamp is a type of high intensity discharge light that produces bright light (in blue and white spectrums). Since the 1960s, metal halides have been used in a number of applications – from sports fields to retail stores. Their ability to produce bright, white light, their relatively long lifespan, and their high luminous efficacy made them the go-to lighting choice for years.

A metal halide lamp produces light when an electric arc goes through a mixture of gases, causing light to be generated. It normally contains a blend of gases like mercury, argon, or xenon and different metal halides. Metal halides are usually formed when halogen is combined with a metal. In metal halide lamps, the metals are usually mixed with bromine or iodine. The specific type of metal halide used helps dictate the color temperature of the light.

We make Customized LED PCB&PCBA in your requirements. 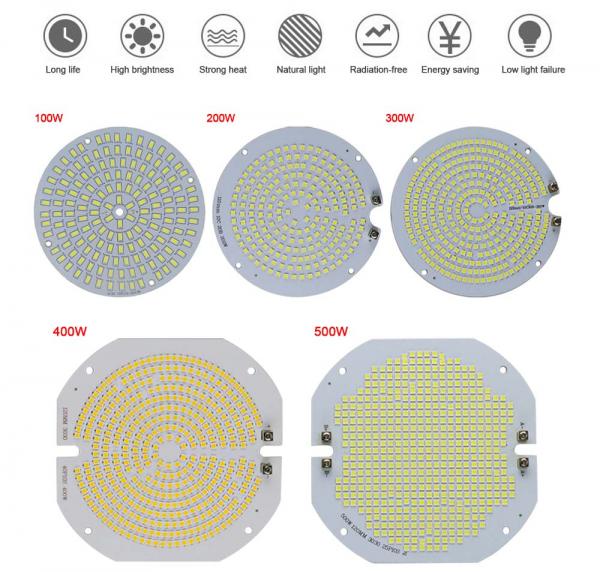 round led pcb board

Shenzhen LZ LED Technology Co., Ltd. has been committed to the R&D, manufacturing and applying of qualified TOP LEDs & LED products since the year 2009. Our products include super high quality 3mm,5mm,10mm led diode, 3528,2835,5050,3014,5730,3030 SMD LEDs, they are used in ranges of fields , including the led linear light, led high bay light, led downlight, led panel light, led floodlight, led tube, led strip etc. we also provide OEM/ODM each kind of LED PCBA. Our products has obtained the approval of numerous and well-known enterprises both at home and aboard.

With the headquarter locates at Shenzhen City, Guangdong Province, LZ LED Technology is a hi-tech enterprise which obtains the support of the local government. We have independent office buildings which cover an area of about 3000 square meters with anti-static and non-dust production workshops, and we’ve introduced the most advanced Automated Production Equipments and Testing Equipments. Recently the company plans to invest another 5 millions RMB to make our company to be the best and most professional manufactory.

We have an experienced management team and a professional technical team, and all the processes have been strictly carried out by term of ISO9001:2008 and TS/16949:2002 which is the strong warranty to our customers for our products.

Adhering to the idea of “honesty, efficiency, innovation”, we supply a sincere customer service with high-speed efficiency. With constant improvements of the staff’s thoughts and deeds, our goal is to design satisfied products for our customers. We make efforts to be a win-win situation. We always have the foothold in China, while having the whole world in view, and actively open up domestic and overseas, which can make us LZ LED Technology to be the most competitive and active company.

"Advocating green illumination, Protecting our environment” is our mission, we will try our best to make contributions to national semiconductor illumination .

Send your message to this supplier
You May Like
Find Similar Products By Category:
Electronics Production Machinery
Hot Searches:
Inquiry Cart 0
Contact Us
Inquiry Cart
Back To Top

Thank you! Your message has been sent to the following suppliers.